Mecatecno have had the Dragonfly electric trials bike under development for a few years now. They competed with an earlier example in the Trial World E Championship, and have used that as a solid foundation to develop the production version. The Hell Team will be importing the Dragonfly as soon as bikes are available. (production starts Nov 22). After an intense time of development and field tests, we can finally present the new Mecatecno Dragonfly Electric Trials bike.

Since 1978, the Spanish Mecatecno company has been focused on designing  childrens and adult trial motorcycles. (see image below of the original DragonFly model)

Now with the resurgence of the brand, they have developed a full size electric trial motorcycle for the first time in its history .

Mecatecno has been working on its prototype for years and has even participated in the Trial World Championship in the Trial-E electric motorcycle category.

In 2018 Mecatecno surprised us with the Dragonfly 2.0 prototype. Now, the renowned Catalan brand shows the definitive and fully developed model.

It will be some serious competition for the French brand Electric Motion, which until now was the only one that marketed electric trial bikes for adults.  The Dragonfly has the same power output as the EM, but is more than 12kgs lighter! The first units will begin to be delivered in November 2022, and we can expect bikes in Australia first quarter of 2023. LINK to TrialWorlds recent test of the Prototype DragonFly. IMA is a system that divides the powertrain into two distinct blocks: the electric motor and the gearbox/clutch. Specifications for this engine/clutch/gearbox concept are as follows: 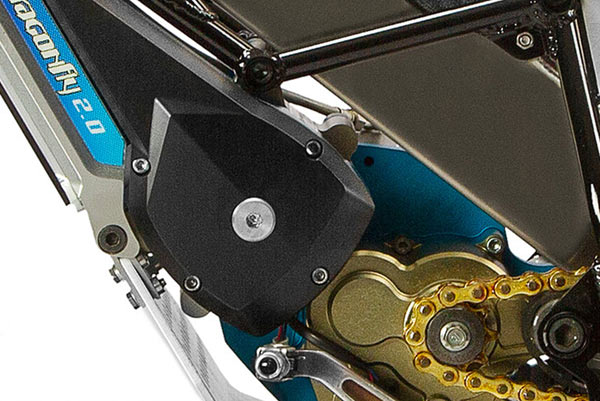 Diaphragm Clutch: a diaphragm one because it provides better control, greater precision, and more adjustment possibilities.

This translates into more tactile control in classic driving style or quicker response in modern driving style, depending on the setting chosen. 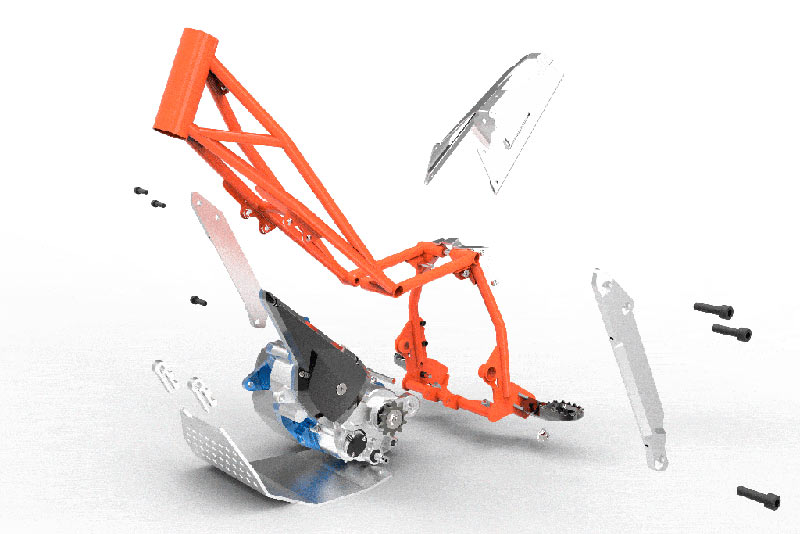 CFA is a system designed to take full advantage of electric propulsion. This means, in other words, not having to limit yourself to the geometric demands of combustion engine motorcycles.

Generally speaking, a traditional motorcycle chassis has to be structural in itself. All the elements are hooked to it, and it is subject to great weight, tensions and constant vibrations. In contrast, the Dragonfly's chassis is not structural in and of itself. Like the human body, in which the bones would not stay in place if they were not supported by muscles, all the surrounding elements participate by adding strength structurally where they are required. This concept, together with the fact that the number of elements is much smaller, much lighter and free of vibrations, allows for a large number of benefits.

Some of these benefits are: 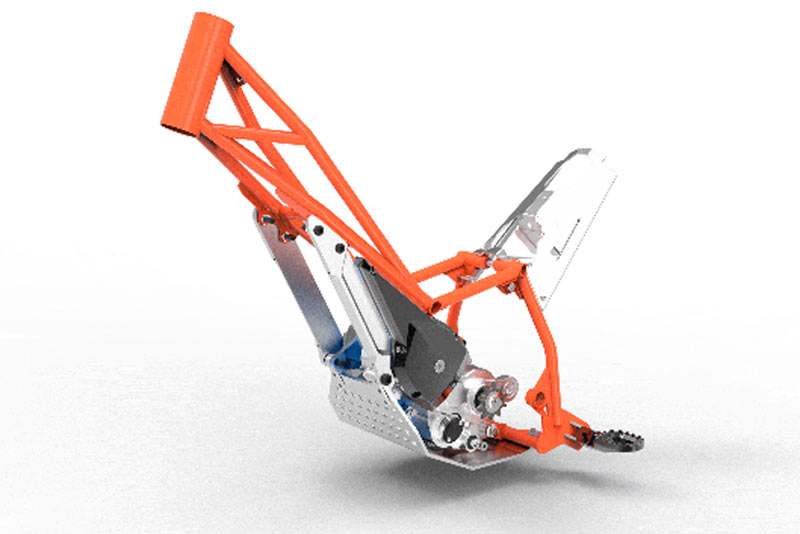 – Overall reduction in weight and dimensions of the tubular chassis.

– Better distribution of the sprung mass and better placement of the center of gravity which has a direct impact on stability, balance and the sensation of weight.

– Great control over frame stiffness with high impact resistance in the central area and controlled torsion near the headstock for a smoother ride.

– Reduction of the skid plate, which provides greater narrowness in that area.

– Simplification of the steps for assembly and disassembly, which favors the maintenance operations of the motorcycle. 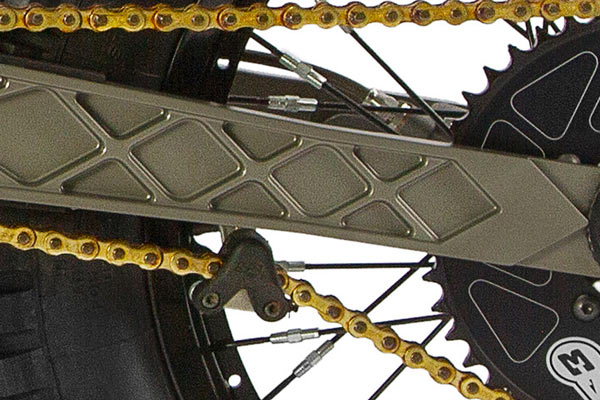 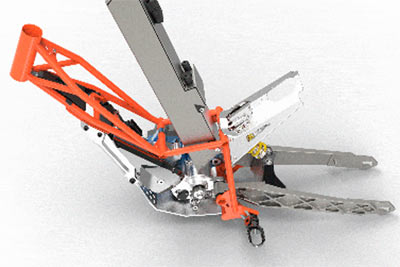 At first glance, the main perceived feature is a highly accessible, easy-to-replace yet protected battery, but much more is at stake. 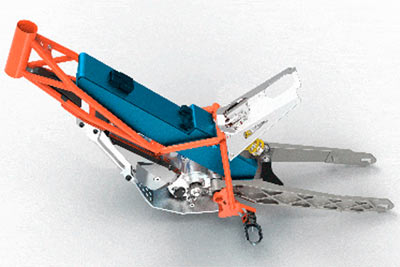 In an electric motorcycle, the battery is the heaviest suspended element. Therefore, it plays a determining role in the behavior and performance of the motorcycle. In other words, the same weight put here or there can make the bike feel lighter or heavier, can help you ride easily and precisely, or make it feel like riding a wild horse.

Mecatetech's objective has been to achieve the greatest precision and ease of piloting, so that it is as undemanding as possible. To achieve this, it has been decided to distribute the mass along the frame and the swingarm, bringing the center of gravity as close as possible to the line of the wheel axles.

The result has been an unprecedented mix that achieves improved stability and balance, an increased feeling of lightness and also an improvement in rear wheel traction. A progressive suspension is essential in trial practice. Helps improve performance on all terrains, and greater traction in both low and high speed. But not everything is positive, because a progressive suspension with a linkage system adds weight, complexity and, in general, a great need for maintenance. Always keep an eye on bearings and mountings, which are too sensitive to adverse conditions. Also, it only works well when everything is correct, a deformed link, a worn bearing, can easily make the system go lousy.

Is it possible to get a progressive system without linkages? It is not easy, it is not cheap, but at Mecatec they have opted for it.

First of all, it requires an excellent, sensitive but robust monoshock. At Mecatecno they have decided that ÖHLINS is the best solution.

Second, we need a ventilated environment to make sure it is stable at any temperature. On motorcycles with a combustion engine, the shock absorber is surrounded by the exhaust pipe, therefore overheated by external agents, but on an electric motorcycle this problem does not exist.

Finally, the correct geometry must be found. After numerous tests, they have developed a geometry that mimics the behavior of a link system, but saves on parts, weight and maintenance.

This category is empty! Please try another category or use our search function to find what you are looking for. If you require further assistance please contact us.

Welcome to our website. If you continue to browse and use this website, you are agreeing to comply with and be bound by the following terms and conditions of use, which together with our privacy policy govern The Hell Team Trials Store’s relationship with you in relation to this website. If you disagree with any part of these terms and conditions, please do not use our website.

We are committed to ensuring that your privacy is protected. Should we ask you to provide certain information by which you can be identified when using this website, then you can be assured that it will only be used in accordance with this privacy statement.

We may collect the following information:

What we do with the information we gather

We require this information to understand your needs and provide you with a better service, and in particular for the following reasons:

We are committed to ensuring that your information is secure. In order to prevent unauthorised access or disclosure, we have put in place suitable physical, electronic and managerial procedures to safeguard and secure the information we collect online.

A cookie is a small file which asks permission to be placed on your computer's hard drive. Once you agree, the file is added and the cookie helps analyse web traffic or lets you know when you visit a particular site. Cookies allow web applications to respond to you as an individual. The web application can tailor its operations to your needs, likes and dislikes by gathering and remembering information about your preferences.

We use traffic log cookies to identify which pages are being used. This helps us analyse data about webpage traffic and improve our website in order to tailor it to customer needs. We only use this information for statistical analysis purposes and then the data is removed from the system.
Overall, cookies help us provide you with a better website by enabling us to monitor which pages you find useful and which you do not. A cookie in no way gives us access to your computer or any information about you, other than the data you choose to share with us.
You can choose to accept or decline cookies. Most web browsers automatically accept cookies, but you can usually modify your browser setting to decline cookies if you prefer. This may prevent you from taking full advantage of the website.

Links to other websites

Our website may contain links to other websites of interest. However, once you have used these links to leave our site, you should note that we do not have any control over that other website. Therefore, we cannot be responsible for the protection and privacy of any information which you provide whilst visiting such sites and such sites are not governed by this privacy statement. You should exercise caution and look at the privacy statement applicable to the website in question.

You may choose to restrict the collection or use of your personal information in the following ways:

If you believe that any information we are holding on you is incorrect or incomplete, please write to or email us as soon as possible at the above address. We will promptly correct any information found to be incorrect.